The Oneida History Department of the Oneida Tribe of Indians of Wisconsin promotes the culture, language, history, traditions, and genealogy to all enrolled Tribal members.

The Oneida History Department collects, organizes, preserves, and makes available materials that pertain to the history and development of the Oneida Nation and its people.

The Hands-On History Bins project evolved out of several request. Local schools and school districts have frequently contacted the Oneida Tribe to request curriculum and materials. In response to request from schools, the Seymour Community Historical Society, and other areas, a special committee was formed under the direction of Chairman Rick Hill, led by former Chief of Staff Bill Gollnick and attended by representatives from several Oneida programs (Y.E.S, Cultural Heritage, Turtle School, etc.) and representatives from Green Bay, De Pere, Seymour and other area schools.

As a result of the special committee, Cultural Heritage and the Oneida Museum were asked to work on curriculum resources for these schools. The idea of a Hands-on bin was first thought of by Michelle Danforth in 2010 and finished by Nicolas Reynolds in 2012. 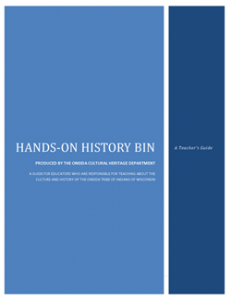 Additional Resources:
• A General History of the Oneida Nation of Wisconsin
• Sagole: A Greeting from the Oneida

Past issues of the Historical Notes can be viewed here by opening an Adobe file. Simply look for the issue that you would like to download and then click on the link to begin. The Historical Notes are created for educational purposes and researchers and students are encouraged to give proper citation to source documents. For help with citation techniques, visit the UW Madison’s Writing Center.

Issue 2, The Origin of the Oneida Clans

Issue 4, The Creation of the Iroquois League

Issue 10, The Iroquois, The Dutch, and the Fur Trade

Special Issue, The Battle at Oriskany

Issue 13, Alcohol and the Oneida

Issue 17, Valley Forge and The Oneidas

Vol. 1, No. 20 The Stockbridge-Munsee and Brothertown Indians

Vol. 1, No. 23 The Treaty of Canandaigua and Annuity Payments

Vol. 1, No. 24 Illegal Treaties and the State of New York

Vol. 2 No.01 Treaty of Canandaigua

All of these works have been made possible by the Oneida Bilingual Program that was directed by Amelia Cornelius and Funded through a Bilingual/Bicultural Education Act: Title VII grant.

The authors originally told the stories in the late 1930’s to the Oneida writers of the WPA sponsored Writers’ Project.

The Leaders, The Chiefs

The Leaders, The Chiefs

Memories of the old days

Memories Of The Old Days

From Creation to Present visit our timeline page.

The Thanksgiving Address by butterflystevens

Iroquois and the Revolution by Josh Gerzetich

Rites of Passage with Latsi

Life Before Gaming – On the Farm

In August 2015, WPT premiered the next series of programming as part of the Tribal Histories project, which included the following three programs:

In August 2014, WPT premiered the first three programs as part of the Tribal Histories project, which included the following three programs:

Programs featuring the other sovereign American Indian nations and tribal communities located within state of Wisconsin will air on WPT in the next couple years.