In the early 1760s, there was a man by the name of Eleazer Wheelock and he had a school called the Moors Charity School in Conneticut that later became Dartmuth College.

Mission Schools were created in the late 1600s because there were some schools of higher learning like the Mary & Williams College and Dartmuth to educated Indian people. Most of those colleges which most have become bigger prestigious schools were started by denominations. Captain Pratt started a school in Carlisle and the students were expected to name a denomination and expected to be Christian and could go to a church of their choice. Then the other denominations throughout the United States were given money by the United States to civilize Indians. (see chart below) Captian Pratt was known for the statement “Kill the Indian, (to) save the man.” This basically was the philosophy that educating Indians would make them human.

One of the things that you see is that, there is normally one denomination that will be stronger in an area, and this was because the churches would basically draw straws to see who would go into an area to Christianize a particular tribe. So for instance a school in Flandreau, South Dakota started by the Presbyterians in 1876 and in time it was turned over to the Bureau of Indian Affairs for a BIA boarding school system. Across the US there were hundreds of schools started. The schools took any Indian students who wanted to attend and many times they would talk to the chiefs or they would entice the chiefs go and visit the schools. Many times the “recruiters” would go to the tribes and explain how the children would be better off and other times they would just take the children without their parent’s permission. Some parents wouldn’t know if the children were alive or dead. The children would stay year round and in the summer, the boys would be farmed out to farmers and the girls would work for wealthy families. 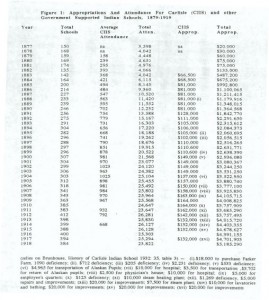 Our beliefs, our customs, and how we view the things (past, present, and future). Also, inlcudes our history and things in our environment that make us distinct from others.