For VA benefit purposes, Gulf War service is active military duty in any of the following areas in the Southwest Asia Theater of Military Operations at any time during the first Gulf War starting August 2, 1990 through the Iraq War.  This includes veterans who served in Operation Iraqi Freedom (2003-2010) and Operation New Dawn (2010-2011).  Specifically, the areas included are: 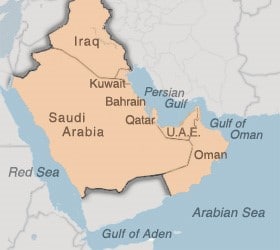 • Iraq
• Kuwait
• Saudi Arabia
• The neutral zone between Iraq and Saudi Arabia
• Bahrain
• Qatar
• The United Arab Emirates (U.A.E.)
• Oman
• Gulf of Aden
• Gulf of Oman
• Waters of the Persian Gulf, the Arabian Sea, and the Red Sea
• The airspace above these locations

A prominent condition affecting Gulf War veterans is a cluster of medically unexplained chronic symptoms that can include fatigue, headaches, joint pain, indigestion, insomnia, dizziness, respiratory disorders, and memory problems.  The VA refers to this as Gulf War Illness or Gulf War Syndrome.

Gulf War veterans who meet the criteria below do not need to prove a connection between their military service and illnesses in order to receive VA disability compensation.

• Chronic Fatigue Syndrome, a condition of long-term and severe fatigue that is not relieved by rest and is not directly caused by any other condition.
• Fibromyalgia, a condition characterized by widespread muscle pain. Other symptoms may include insomnia, morning stiffness, headaches, and memory problems.
• Functional Gastrointestinal Disorders, a group of conditions marked by chronic or recurrent symptoms related to any part of the gastrointestinal tract.  Functional condition refers to an abnormal function of an organ without a structural alteration in the tissues. Examples include Irritable Bowel Syndrome (IBS), Functional Dyspepsia, and Functional Abdominal Pain Syndrome.
• Undiagnosed Illnesses, symptoms that may include but are not limited to: abnormal weight loss, fatigue, cardiovascular disease, muscle and joint pain, headaches, menstrual disorders, neurological and psychological problems, skin conditions, respiratory disorders, and sleep disturbances.

The VA presumes certain infectious diseases are related to military service in the Southwest Asia Theater of Operations during the Gulf War starting August 2, 1990 through the conflict in Iraq and on or after September 19, 2001 in Afghanistan.  Veterans must have the diseases within the time frames shown below and have a current disability as a result of the disease in order to receive disability compensation.

The following conditions must be at least 10% disabling within one year from date of military separation:

The following conditions have no specific time frame in which they have to be diagnosed:

The VA and research organizations continue to evaluate possible causes of Gulf War chronic multi-symptom illnesses, including exposure to oil well fires, smoke and petroleum, and receipt of vaccinations.

They have also evaluated exposure to pesticides during Gulf War service as a possible cause of chronic multi-symptom illnesses and concluded that the evidence does not support an association.

Veterans from the 1st Gulf War (August 2, 1990-March 3, 1991) may have been exposed to a variety of environmental and chemical hazards that carried potential health risks.  These hazards include:

All Gulf War veterans are encouraged to get a Gulf War Registry Exam done.  This exam alerts veterans to possible long-term health problems that may be related to environmental exposures during their military service.  The registry data helps the VA understand and respond to these health problems more effectively.  This comprehensive exam includes an exposure and medical history, laboratory tests, and a physical exam.  This exam is free to the veteran, and the veteran does not need to be enrolled in the VA health care system to get the exam.

Our beliefs, our customs, and how we view the things (past, present, and future). Also, inlcudes our history and things in our environment that make us distinct from others.