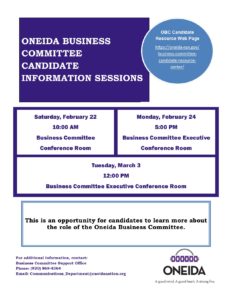 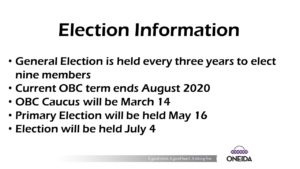 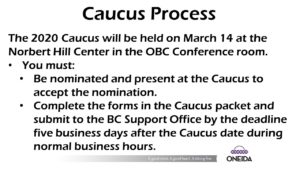 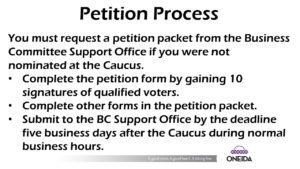 How to get on the Ballot?

There are two ways to get on the Ballot:

First, the Caucus process – The 2020 Caucus will be held on March 14 at the Norbert Hill Center in the Business Committee Conference Room.

What positions are up for election on the Oneida Business Committee (OBC) this year?

All nine positions are up for election this summer. They include the Chairman, Vice-Chairman, Secretary, Treasurer and five councilperson positions.

What is the timeline for the election process?

Who can vote in the election?

All enrolled Oneida members over the age of 18 may vote.

What is the General Tribal Council (GTC)?

Article III of Oneida’s Constitution identifies that the General Tribal Council is the non-elected governing body of the Nation.  GTC is only in session when 75 or more members are gathered at a duly called meeting.  GTC is comprised of all enrolled Oneida, 18 years & older.

Who can contribute to my campaign?

Candidates shall only accept contributions from members of the Nation or individuals related by blood or marriage.

Where can’t I campaign?

Candidates shall not solicit or accept contributions in any office or business/facility of the Nation.

Employees of the Nation shall not engage in campaigning for office during work hours.  (Employees shall be subject to disciplinary action)

What about campaign signs?