Oneida Nation Chairman Tehassi Hill and Councilwoman Marie Cornelius joined the Green Bay Packers and their business partners for an all-expenses paid trip to England as the team squared off October 9, 2022, against the New York Giants. The journey provided networking opportunities for the Nation’s leadership and the chance to further educate others about who the Oneida Nation is. Here we see Hill and Cornelius with Packers legend and 2022 Pro Football Hall of Fame inductee LeRoy Butler. 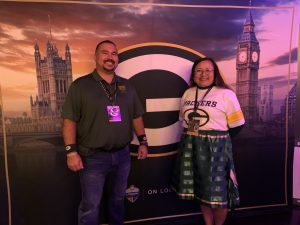 Although the Green Bay Packers fell 27-22 to the New York Giants at London’s Tottenham Hotspur Stadium October 9, 2022, Oneida Nation Chairman Tehassi Hill and Councilwoman Marie Cornelius took this first-time opportunity to travel with the team to the United Kingdom to network and educate potential business partners about all the tribe has to offer. Both Hill and Cornelius accepted the Packers’ offer to attend the event as part of their Oneida Business Committee (OBC) Broad Goals of Culture and Language, Revenue Generating, and Government Roles and Responsibilities.

“Overall, I feel the trip went well and was a benefit to the Nation,” Chairman Hill said. “This opportunity provided us the chance to get to know people working within the Packers’ organization better, as well as other Packers’ business partners on a more one-on-one basis. And while we made efforts to advance our networking with potential foreign businesses, this opportunity turned out to be more effective as a domestic networking opportunity. We ended up having good conversations with Coke, Coors, and Cenex, among others.”

Both Hill and Cornelius were introduced to the Vice President of Marketing and Retail Development of Cenex, the Chief Customer Officer and the Market Unit President of Coca-Cola, and the President and CEO of Molson Coors. Through these introductions and time spent together on the trip, Cornelius was able to share a general overview of the uniqueness of Indigenous Nations, their sovereignty status, and the importance of honoring treaties. Hill took advantage of the chance to educate people about the programs, services, government, and businesses the Nation conducts. 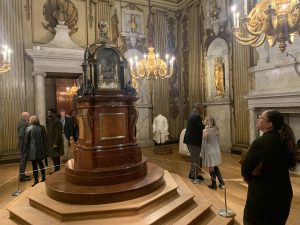 During her discussions with these high-level executives, Cornelius also provided them with some new understanding of tribal relationships with the United States Government. She also talked about labor shortages and other challenges currently facing all employers across Turtle Island, including the Oneida Nation.

“This London trip was a grand opportunity to travel with the greatest historical National Football League organization in existence,” Councilwoman Cornelius said. “It also allowed for opportunities to introduce the Oneida Nation to executives from some very large corporations, who now have a much better understanding of what an Indigenous Nation really is and the knowledge that we are still here fighting the good fight.” 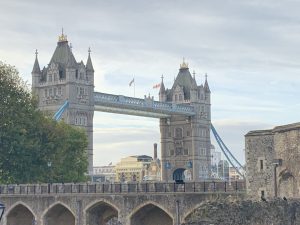 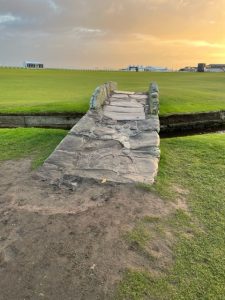 “The flights over to Europe were long, with us leaving Green Bay at noon and arriving in Scotland the next day at 2:30 p.m.,” Hill said. “We had the chance to see some of the historical sites of Scotland before hopping on another flight to London that evening. The following day we were able to tour London and see many of the sights the city has to offer including the Tower of London, and Kingston Palace which now serves as a museum dedicated to the British monarchy. It was really amazing to see so many Packers fans show up for the game in a foreign country, but too bad they couldn’t come away with the victory.”

The all-expenses-paid invitation from the Packers included roundtrip airfare, hotel accommodations, special events, and game tickets. Per diem for meals not included were deducted from Chairman Hill’s and Councilwoman Cornelius’ travel budget.