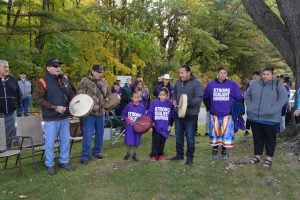 Native Nations correct numerous historical inaccuracies about the European colonization of what would eventually become known as North America. Dozens of tribal citizens, community members, students, employees, Oneida Royalty, and drum group Buffalo Creek were in attendance as the Oneida Nation began Monday, October 10, 2022, with a gathering behind the Norbert Hill Center to celebrate and acknowledge the continued presence and perseverance of Native tribes across the continent. Oneida Nation Vice Chairman Brandon Yellowbird Stevens and Councilmembers Jennifer Webster, Daniel Guzman King, and Kirby Metoxen were present in support of the Oneida Business Committee’s (OBC) Broad Goals of Education and Culture and Language. 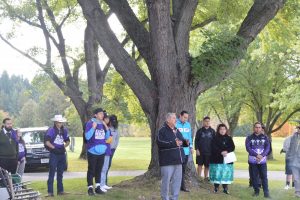 Dr. Artley Skenandore opened the ceremony by touching on the significance of the day while Cultural Healing Advisor Sonny Hill followed with the traditional tobacco burning and opening prayer. Vice Chairman Stevens then recited the specific OBC Resolution that officially recognizes October 10 as Indigenous Peoples’ Day on the Oneida Nation Reservation. “Through Resolution 9-11-91-B, The Oneida Tribe of Indians of Wisconsin (as they were known in 1991) disagreed with further recognition of Christopher Columbus by opposing AB375 which would have renamed a highway after Columbus, and also declared 1992 as a year to correct historical inaccuracies,” Stevens said.

Following through on that declaration, the Oneida Nation took action and placed advertisements in several major newspapers to correct those inaccuracies and “in a continued effort to educate and inform the public concerning the truth about Christopher Columbus, the Columbus Day federal holiday has been reclaimed as Indigenous Peoples’ Day in several communities throughout the United States, including South Dakota, California, Colorado, and Oklahoma,” the resolution reads.

“Proclaiming Indigenous Peoples’ Day is a concrete opportunity to denounce the historically inaccurate account of the ‘Discovery of America’ by Columbus and associated false theories of the ‘Doctrine of Discovery’ and ‘Manifest Destiny’ whereby the genocide and violence of Indigenous peoples is not acutely considered,” Stevens continued.

“Reclaiming Columbus Day as Indigenous Peoples’ Day is also an opportunity to promote healing and wellness in Oneida whereby these legacies are inextricably connected to the existence of federal boarding schools, removal from traditional lands and culture, and trauma from further acts of colonialism,” Stevens said. 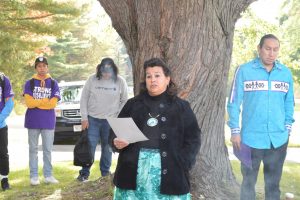 day. “We’ve had a painful history,” Webster said. “It wasn’t that long ago we were traveling on gravel roads visiting the dentist when we had one dental chair in the basement of the Chicago Corners tribal building. Today we celebrate the countless contributions Indigenous people have had on Turtle Island. We celebrate and honor our past leaders and our family and friends who brought us through assimilation, termination, and removal. We survived.

“Our roots are deeply imbedded in this land where our parents and grandparents fought so hard to keep our families together through harsh times,” Webster continued. “The COVID-19 pandemic has highlighted and exacerbated our health inequities. We’ll survive this as well. Indigenous people are built on resilience, determination, and perseverance. Remember what our parents did for us in order for you to be standing here. Remember you have a purpose and a responsibility on this earth, we all have a responsibility, not only to care for this land but to make sure our children and grandchildren know what it is to be strong, resilient, and Indigenous.”

To view OBC Resolution 9-11-91-B, which outlines the Oneida Nation’s opposition to any further recognition of Christopher Columbus as well as declares 1992 the year to correct historical inaccuracies, please visit: 09-11-91-B-Opposition-of-Christopher-Columbus-Quincentenary-Highway.pdf (oneida-nsn.gov).