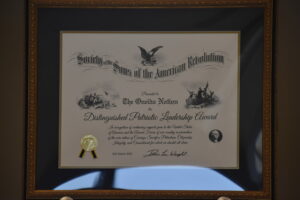 Wright then paused to offer a thought he’d contemplated for years. “Part of me wonders if I’d even be here if it weren’t for the Oneida people,” Wright said. “My patriotic ancestor served in the 12th Pennsylvania Regiment and spent that famous winter at Valley Forge. It was there, where I have no doubt, that he was saved by the gift of corn by the Oneida people. I found this to be very moving and very personal as I was preparing for this presentation.

“I would like to say on behalf of the National Society of Sons of the American Revolution, our 35,000 members, that I’m very pleased and honored to be here to present the Distinguished Patriotic Leadership Award to the Oneida Nation,” said Wright.

Chairman Hill then spoke while accepting the award. “On behalf the Oneida Nation I accept this distinguished recognition today,” Hill said. “We are grateful for this honor from the Sons of the American Revolution. Our history about Valley Forge continues to be shared to this day. For our people the recollections of Valley Forge bring to mind the patriotism of our Oneida Warriors who served in every military conflict on the side of the United States since the Revolutionary War.

“The Oneida people have passed on stories of how our warriors showed courage through the suffering and tragedy of war, and how their perseverance led them to survive the scourge of destruction and decimation of their homelands. Our people take great pride in sharing the history of the Oneida white corn at Valley Forge. This story has been shortened but its impact is quite powerful. So,  w 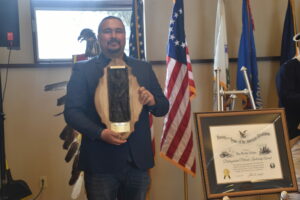 ith a good mind, a good heart, and a strong fire, I express our gratitude for this honor today. Yaw^ko.”

“For me this is a lasting memory in the highlights of my year as Vice President General of the Great Lakes District Sons of the American Revolution,” Austin said.