Oneida Nation’s Karen Ann Hoffman was a stalwart in the efforts to get a permanent memorial placed on the UW-Stevens Point (UWSP) campus commemorating a large, unacknowledged Indigenous burial ground. Once selected, the memorial will be placed near the Communication Arts Center (pictured). UWSP has released a ‘Call for Artists: Ancestors Buried Below Us,’ with the goal of attracting Indigenous artist’s submissions.

An Indigenous burial site on the grounds of where the University of Wisconsin – Stevens Point (UWSP) now sits will finally be given the respectful recognition it’s been denied for nearly 150 years. Oneida Nation citizen and former UWSP student Karen Ann Hoffman, along with retired UWSP history professor and archaeologist Dr. Ray Reser, spearheaded an effort to get the university to finally acknowledge the existence of the site.

“Honestly, I feel like the ancestors led the charge on this one,” Hoffman said. “I feel our dead deserve to rest because daily, weekly, people walk on their graves and they don’t even think about it and that level of disrespect is disturbing to me and our deceased.”

During the mid-1800s Native people from many tribes including Menominee, Ho-Chunk, Potawatomi, and Ojibwe were on the move after being forcibly removed from their ancestral homelands by the United States Government. An encampment had been established at the current UWSP site where a prehistoric Menominee village once stood. The encampment was home to an estimated 1,000 inhabitants at various times. A Scarlet Fever epidemic broke out in Stevens Point between 1863 and 1870 and soon spread to the camp, taking the lives of many of the Native population.

Stevens Point residents of the time refused to allow their bodies to be buried in area cemeteries, so they were buried in a common grave in an old quarry without any traditional ceremonies, feasts, or prayers. Following the epidemic, the remaining Natives at the site moved on, and locals began using the quarry as a garbage dump. The State of Wisconsin eventually took over the land and UWSP was established on the site in 1894.

“There is no reason not to believe there was institutional knowledge of this burial site from the very beginning,” Hoffman said. “There were rumors of this when I was a student 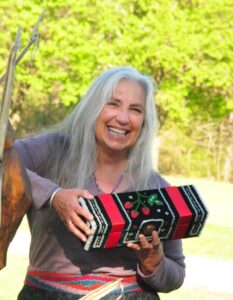 there during the 1970s, but honestly does that really matter? Now that we all know, it would be silly to just point fingers or lay blame, but the question remains what will we do to honor these dead?”

Hoffman teamed up Reser (himself unaware of the burial ground’s existence until 2016, even after having served as an archaeologist on campus for three decades), to compile the necessary information which eventually led the State of Wisconsin to declare the site an official burial ground. “The impetus since at least 2016 was to get the university to do some formal acknowledgement regarding the existence of this site.”

A temporary memorial marker was placed on campus, and now Hoffman, a nationally renowned artist, is leading another effort to place a permanent art memorial on the site. Her persistence led UWSP to release a ‘Call to Artists: Ancestors Buried Below Us’ with the expressed goals of the project being to appropriately honor all of the Indigenous buried beneath the campus, to educate the university community about the tragedy that led to the disrespectful burial and years of neglect, and to engage the Native community through the solicitation of art.

“The exact details of the placement will depend on what is submitted and what is accepted,” Hoffman said. “The acknowledgment could be 2D, it could be 3D, it could be landscape architecture, plantings, benches, alters, or even digital. This is why it’s so important for our artists to weigh in on what our voices feel it should be. It’s important for me personally, not necessarily the university, that a Native voice from our community of artists receives this commission, because I’ve seen what happens when other voices control our dead. This is long past time.

“Although I am grateful on behalf of those who can no longer speak with their mouths for this small step forward, there is still so much that we can learn from this experience of our ancestors. This is the reason why I am so passionate about this. I truly believe they want us to learn how to treat one another. I’m actually hearing from Native artists already who are extremely excited about this opportunity so I encourage everyone, or even groups of everyone, to submit whatever they are moved to submit.”

Submissions by Native artists for this ‘Call to Artists’ will be given preference for the project, and it is open to individuals who’ve demonstrated a deep understanding of Native American history, voice, and experience in Wisconsin. “If you’re a Native artist and you make a submission, I would suggest including reference to your tribal identity because we would be able to understand the art a little more if we understand something about the artist,” said Hoffman.

There is a firm deadline of February 14, 2022, for all submissions. The selected artist will receive a $5,000 honorarium for their design. Groundbreaking for the permanent memorial is tentatively scheduled for sometime in 2023. For more information regarding this ‘Call for Artists,’ please visit www.uwsp.edu.

Submissions and questions can be directed to: