(Oneida Reservation) -Chaske Jacobs signed his letter of intent December 20, 2021 to play College Lacrosse at the University of Dubuque Iowa. As a Senior at the 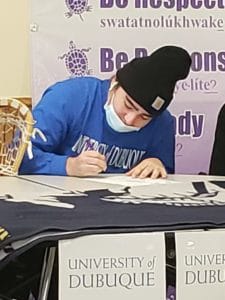 Oneida Nation High School Chaske has been an avid Lacrosse and basketball player. His skills and perseverance have led him to narrow the choice to Lacrosse. He will join the Spartan Men’s Lacrosse Team which is in the Midwest Lacrosse Conference.  The University of Dubuque is a private college with a strong foundation in Liberal Arts.

Chaske signed his letter today surrounded by his family who provides the encouragement and support throughout his young life.  His Athletic coaches watched him sign today and gave him the spiritual and academic encouragement to go further in his quest to play Lacrosse.  He was encouraged to go to learn and master his skills and one day return to Oneida to share what he has learned and possibly become a coach in his hometown, someday.

Chaske is the son of Dionne Jacobs and Randy Jacobs.