The Oneida Nation, along with the Daughters of the American Revolution, dedicated a Liberty Tree marker October 9 at the Oneida Veterans 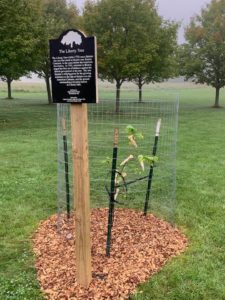 Memorial Wall to the service of Captain James Powless. Captain Powless was one of 12 Oneidas and Tuscaroras who were given line officer commissions during the American Revolutionary War. Powless served from 1777-1784.

Two years prior to the official start of the Revolutionary War, colonists publicly expressed their displeasure with British rule and taxation. “The big act of defiance from the colonists came with the Boston Tea Party in 1773,” Stevens said. “A large group of men dressed up as Indians and dumped tea into the Boston port to protest British rule.

“War began April 17, 1775, between the 13 colonies and Britain. At the time the 13 colonies, each acting as their own government, were not prepared for war. George Washington was a rich farmer in the colony of Virginia who ultimately became the Commander-In-Chief in 1775 and led the colonists to war.”

On July 4, 1776, the 13 colonies declared their independence from Britain and the Constitution of the United States was enacted into law. “Left out of the history books was the influence that the Iroquois Confederacy had on the writings of the Constitution by Thomas Jefferson, and Benjamin Franklin,” Stevens continued. “Franklin had written, using the word ‘savage’ as an ironic term, ‘The savages are in fact as civilized, or more civilized, than the whites. It is the whites who must rely on force, punishment, and prisons to enforce good behavior.’

“Through a series of battles where both sides lost a tremendous amount of life, the war lasted until 1783 when Britain was forced to recognize the independence of the 13 colonies. During the Battle of Oriskany on July 6, 1777, General Herkimer, 1,800 soldiers, and 60 Oneidas were ambushed while on their way to relieve the siege at Fort Stanwix. The British had convinced the Mohawks to join them in their ambush. The Battle of Oriskany is considered one of the bloodiest battles of the Revolutionary War. For Native people it represents the time when the Iroquois Confederacy had been broken and Indians were fighting Indians.”

In the winter of 1777 General George Washington and his troops set up camp 25 miles west of Philadelphia at Valley Forge. “The Continental Army faced some of the worst conditions during the winter and the Oneidas came to their aid,” Stevens explained. “The site was a strategic location from which the army could monitor the British. Conditions worsened for the already weary army when it became harder for their supply system to get food to their soldiers. They were starving and had inadequate clothing and it was noted that their frozen feet were bleeding in their boots.

“The late Oneida Tribal Historian Loretta Metoxen wrote, ‘Chief Skenandoah was the unwavering friend to Americans. He believed in the cause of the colonists and warned his white neighbors of the British invaders. It was he and the Oneidas who saved Washington’s starving army at Valley Forge by bringing them several hundred bushels of corn which converts to 70 pounds per bushel. The route was not an easy one. The Oneida traveled over 200 miles from Fort Stanwix to Valley Forge. Even this amount of corn was inadequate to feed the Iroquois, but it was considered a great deed by the Oneidas. The soldiers were so hungry that they had to be held back from eating the uncooked, dried corn which would have bloated their bellies.’”

An Oneida woman named Polly Cooper stayed with the troops and showed them how to cook the corn. “There are two different accounts on how she was recognized,” Stevens said. “In one story, Washington had offered her money which she refused. Another story is Martha Washington had brought her a shawl, bonnet, and a hat from Philadelphia. We do know Martha did give Polly one of her shawls.”

General George Washington then assigned General John Sullivan to deal with the tribes who had sided with the British during the Revolutionary War. “This included the Mohawks, Cayugas, and Seneca tribes,” Stevens explained. “The Oneidas and Tuscarora sided with the colonists during this time, and this became known as the Sullivan Campaign. General Sullivan, along with his army of 3,500 men, took no mercy. He destroyed at least 40 villages by burning their crops and homes. This destruction led to over 500 Iroquois being displaced and many starved and froze to death during the winter months.”

Senator Dale Kooyenga then read a replica of a Revolutionary War letter sent from General Washington to the Oneida people. The letter, found by members of the Library of Congress and the replicated by the Wisconsin Historical Society, was then presented to veteran representatives of the Oneida Nation.