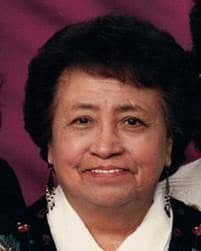 Delphine Doxtator, 90, Oneida, passed away on Tuesday, December 29, 2020. The daughter of the late Leander and Evelyn (Hill) Danforth was born on January 18, 1930, in Oneida. Delphine was united in marriage to Rimton Doxtator. Rimton preceded Delphine in death on June 14, 1980.

Delphine was a proud member of the Oneida V.F.W. Auxiliary and the Oneida Nation. She enjoyed playing softball in her younger years. Delphine also liked playing bingo. She was honored to take care of her daughter, Joann. Delphine worked for many years at Green Bay Food.

Delphine was preceded in death by her daughter, Joann Doxtator; her son, Rimton Doxtator, Jr.; three brothers: Leander, Kenneth, and Joe Danforth; one sister, Arlene Danforth; many brothers-in-law and sisters-in-law.

Per Delphine’s wishes, no funeral services will be held. Burial will take place at a later date in Holy Apostles Cemetery in Oneida. Muehl-Boettcher Funeral Home, Seymour, is assisting the family with their arrangements.

The family extends a special thanks to Compassus Hospice and Delphine’s nephew, Matthew Cornelius, for their compassionate care.

Online condolences to Delphine’s family may be expressed at www.muehlboettcher.com