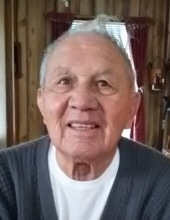 He was born April 3, 1932 in Outagamie County in Wisconsin to parents Wilfred and Lena (nee Cornelius) Webster. Don served in the United States Army where he fought in the Korean War. He received numerous medals. He worked at Redford Paper Company for 40 years. Don was a devoted husband and was very involved in his church. He will be deeply missed by friends, family, and all who knew him.

A private committal service will be held for the immediate family at St. John Cemetery in Monches with Deacon Allen Olsen officiating.