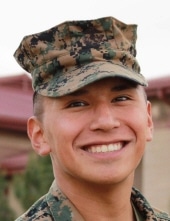 Green Bay – Desmond C. Baird, 23, Green Bay, passed away on Wednesday October 14, 2020 in Temecula, California. He was born July 16, 1997 to Kevin Baird and Cheyenna Delgado. Desmond was a 2015 graduate of Ashwaubenon High School. In 2016 he joined the U.S. Marine Corps. and graduated from MCRD San Diego. In 2019 Corporal Baird deployed with the 11th MEU 3/5 Darkhorse aboard the USS Boxer. Upon return from deployment he finished his active duty and was honorably discharged in June 2020. Throughout his military career, Desmond was the recipient of several medals including; National Defense Service, Global War on Terrorism Service, Sea Service Deployment, Global War on Terrorism Expeditionary, and the Marine Corps Good Conduct Medal. He wore his French Fourragere cord proudly.
On February 18, 2020 he was united in marriage to Noelle Boivin.
Desmond was known for his infectious smile and great sense of humor. He was always very driven, was known to be a solid marine with a positive attitude that lifted all those around him. He was a phenomenal leader who inspired those around him to always do better. A true Hero.
He is survived by his wife Noelle and their beloved dog, Hank; his parents, Cheyenna (Tony) Ambrosius, and Kevin Baird. Desmond is further survived by his siblings; Keandra, Avianna, DeMarco, Benjamin, and William, as well as his grandparents Edward Delgado and Theresa Nastacio, and numerous aunts, uncles, cousins, and friends.
“What do you think about when I say the word ‘love’?”
Forever, A Home In My Soul.
-Desmond Baird