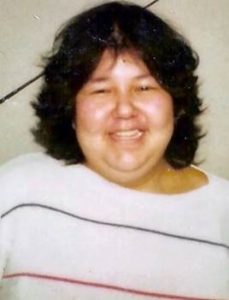 Carla Jan Bridges (nee Skenandore) passed away peacefully at home on Wednesday, August 26, 2020 in Oneida, Wisconsin at the age of 54 after many years of living with end stage kidney disease.

Carla was born on February 3, 1966 in Milwaukee, Wisconsin to Marena Annette Pamanet (nee Danforth) and Gordon Francis Skenandore (deceased). She married Wesley Bridges Sr. (deceased) on August 12, 1985 in Milwaukee, Wisconsin. Over the next three years, the couple welcomed three children, and Carla set about teaching them all about strength, courage, endurance, and a mother’s love. Her children remember her as a kind, patient, supportive, surprisingly funny, and unconditionally loving mother who encouraged them in every aspect of their lives.

Carla earned her HSED from Northwest Technical College (NWTC) in December 1999. She went on to earn her CNA license from NWTC in March 2000 and her Pharmacy Technician license from the University of Phoenix in January 2002. After moving to Green Bay, Wisconsin in 1994, Carla worked for the Oneida Nation in various positions throughout the organization. She spent the last many years of her 17 years of service to the Nation as a Cage Cashier at the Irene Moore Activity Center (IMAC) where she made many friends.

Carla was a wonderful card and dominoes player (often frustrating her husband with her constant winning) and a great swimmer. She was a generous, dedicated woman who loved her Lifetime shows, arts and crafts, soap operas, horror films, true crime shows, puzzle books, computer games, cruising in her car, traveling, shopping, swimming, trying new recipes, family game night, and live shows/concerts (especially Smokey Robinson live). She loved playing surrogate mom for her children’s friends and often expressed that she loved them like her own children. She was passionate about being a supportive mother to her children and received so much joy from being an Aunty and Great Aunty to all her nieces and nephews.

The family would like to thank the team at DaVita Fox River Dialysis (especially Donna, JoAnn, Kessa, and Kim), St. Vincent’s Hospital staff, and the Unity Hospice for their care.