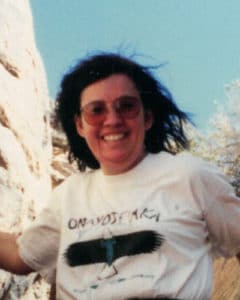 Rosalind “Roz” Ann Webster, 67, passed away on August 12, 2020. She was born on April 23, 1953 to Janet Florine (Charles) Dessart. Father Thomas “Mickey” Dessart. She was the oldest of 7 children. She married her love of her life, John Webster on November 23rd, 1974 at the Oneida Methodist Church. They were married until his death in 2015. Rumor has it she snagged him with her Firebird.

When she was younger, she spent some of her time with her grandparents. Over the course of her life, she worked at various jobs including Proctor & Gamble, the Oneida Y.E.S. program (Pulaski & West De Pere), Oneida Transit, and being a mom. She also graduated from Silver Lake College in 2004.

She enjoyed her many camping trips up to Door County with her family where she spent many nights sitting around a camp fire listening to Uecker announce Brewer games on the radio. Roz was also an avid Packers fan and she enjoyed cheering for Jeff Gordon during NASCAR races. As she slowed down with age, she also enjoyed passing her time putting together puzzles and coloring.

Our family is grateful for the those who helped take care of Roz during the difficult times right after she lost her husband and kept her as independent as possible for as long as possible. Toward the end of her life, she battled with Alzheimer’s but continued to find the strength to dance and smile. Our family would like to thank the staff at Marla Vista Assisted Living and Dr. Flood for their care in helping taking care of Roz. Our family would also like to thank the nurses & doctors at St. Mary’s who helped make Roz comfortable with her final battle with COVID-19. A big thank you to all those who tended to her fire, kept our family fed, and kept us in their prayers these last few weeks.