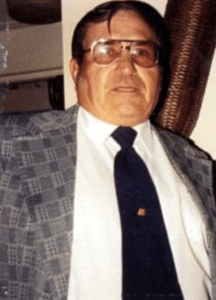 Clyde Herman Cornelius Sr., 84 of Parker, Arizona passed away at Estrella Rehab Center in Avondale, Arizona on Sunday, May 31, 2020. Clyde was born in West De Pere, Wisconsin on September 5, 1935 to Eastman Cornelius and Ellen (Moore) Cornelius. He married Betty L. (Eddy) Cornelius on June 22, 1964 in Las Vegas, Nevada. They had one son Clyde Cornelius Jr. and one grandson, Thomas Cornelius. Clyde is also survived by a sister, Yvonne Honea, Van, Texas and many nieces and nephews.

Clyde, a member of the Oneida Tribe of Indians in Wisconsin, was preceded in death by his parents, three sisters; Lillian Bischoff, Leila Carson and Caroleen Skenandore, and four brothers; Carl Cornelius, Clifford Cornelius, Eastman Cornelius and Orville Cornelius.

Clyde had an illustrious life and career. He graduated from Freedom High School, Freedom, Wisconsin in 1955; he would earn a Bachelors Degree in Commercial Business in 1957 from Haskell Institute, Lawrence, Kansas. Upson graduation, his first assignment was with the Area Office of the Bureau of Indian Affairs in Phoenix, Arizona. In 1958, he was drafted and served two year military stint stationed in Germany. After his discharge, he returned to the Phoenix Area Office and resumed his career with the Bureau of Indian Affairs. Over the years, he transferred six times to different states for his civil service career. After over thirty-three years, he retiered from civil service on November 30, 1990. He moved his family for the last return to work for a few years with the Quechan Indian Tribe, Yuma, Arizona and the Colorado River Indian Tribes, Parker, Arizona.

Clyde loved to fish, hunt, travel, gamble at casinos, to watch sports and when younger to go boating and skiing. He was die-hard Green Bay Packers fan. However, he also supported the Arizona Cardinals and baseball franchise the Arizona Diamondbacks. His fishing skills came from the old school fishermen of his youth. He said “Fishing was in their blood and his”. He was happy to see his family carry on the Oneida traditions.

Clyde had a wonderful sense of humor, he loved Mexican Cuisine, loved the desert and loved his family.

A celebration of Life service will be held at a later date. Watch for announcement and Flyer.

Condolences may be sent to the following email: Mohavebeader@gmail.com