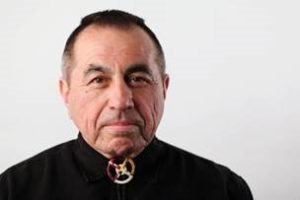 Charles Frederick Whitney Wheelock, “C.F.W.,” “Chaz,” “Chuck,” Tsyata’ti (Along the River Bank), Turtle Clan of the Oneida Nation, 69, passed away unexpectedly at his home on May 23, 2020. Chaz was born to Delores Wheelock and Kenneth L. Hill on August 24, 1950. He was raised by Charles and Rose Elm and then Ray and Lena Swamp.

Chaz dedicated his life to serving the Oneida and greater Haudenosaunee community. He was an indigenous intellect, an advocate for indigenous agriculture and food sovereignty, a staunch political activist, champion of the return of ancestral Oneida Land, an environmental activist, and an advocate for the rights of indigenous people throughout the world. He contributed to many projects over the years and was especially invested in his work as one of the founders of the Indigenous Environmental Network.

Chaz was a familiar face throughout the community, always showing up early to events to help out and sticking around to visit and clean up after. He assisted in building the first Haudenosaunee longhouse in Oneida, Wisconsin and did his best to live by those teachings. Chaz was one of the proud founders of Iroquois Farms, the first organized organic agricultural project in the Oneida community. He encouraged sports and outdoor experiential development for the youth. He especially loved baseball and was a lifetime member of the Commando – Ranger rivalry. Play on compadres!

At home, his heart was with his children, and especially his youngest grandson Jackson. He had great pride in his children’s accomplishments and always challenged them to be their best. He took them along on many of his trips as he shared with them the importance of the People and the Land and the connection between the two.

A life spent building friendships and relationships with people throughout the greater Turtle Island and across Mother Earth, his work is done. He can rest peacefully.

The family humbly invites the community to a drive-through memorial Tuesday, June 2 from 10:00am – noon at the Oneida Longhouse. Per his wishes, his ashes will be spread in the three Oneida communities at a later date.