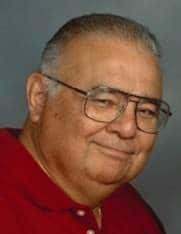 It is with deep sorrow the family of Lee “Gordy” McLester III shares his life story.  Gordy was born August 20, 1939, and traveled home, on May 26th, 2020 at the age of 80.  He was in the United States Marine Corps, and was also a known Machinist, Historian, Business Owner, Editor, Author, Tribal Leader, Casino Manager, Casino Consultant, and Oneida Hymn Singer. But he was most proud to be a Husband, Father, Grandfather, Great Grandfather, and friend to many.

With his parents, Lee McLester II and Pearl (Schuyler) McLester, he grew up in Detroit and Oneida.  He graduated from Seymour High School, and then married the love of his life, Betty (Benson) McLester on August 8, 1959.  They were married for 60 wonderful years and is survived by his 4 children.

Gordy owned and operated, with his father, a machine shop on the reservation for 17 years and employed and trained many Tribal members.

Gordy decided he wanted his children and generations to come to be able to learn about their culture. We have an oral tradition and he wanted to capture this on paper, so it would not be lost.  He became an Author, Editor and Historian documenting the Oneida Nation with a collection of work that epitomizes our culture, our history and our community. His books and projects are utilized in various venues to encourage and advance intercultural understanding and appreciation of the Oneida Nation.

As a former elected official McLester served as Tribal Secretary and Councilman and was an integral part of the growth of gaming. McLester while on council was in full support of Oneida becoming the first Tribal Smoke-shop in our region.  He was instrumental in the development of the Tribal Corporation to sell untaxed tobacco in Oneida.

In July of 1986 the Oneida Tribe held their inaugural Oneida History Conference at their newly constructed Oneida Rodeway Inn, now known as the Radisson Hotel and Conference Center. The conference was the first in countless initiatives led by Gordy which brought forward a rekindling of pride, knowledge and appreciation of the history and culture of the Oneida Nation.  The first of four publications came from that first Oneida History Conference, The Oneida Indian Experience, Two Perspectives, was the first. Gordy, in his modesty, was not credited as an editor or reviewer of the book, but he was personally and professionally the responsible party in bringing the first book to fruition.  Following the first book, McLester was credited as editor of the other books, The Oneida Indian Journey, The Oneida Indians in the Age of Allotment, The Oneida and he is the co-author of the book, Chief Daniel Bread and the Oneida Nation of Indians.  He co-edited the books, Oneida Lives and A Nation within A Nation, Voices of the Oneidas in Wisconsin.  His latest publication in 2019 was about the relationship between the Oneida Nation and the Episcopal Church and while being blind for two years.  He was also in the beginning stages of a book entitled “Salt Pork Avenue”.

The Oneida Reservation has many functions which preserve our culture and our history and cultivate positive inter-cultural relations in our community. McLester had served on the Vestry of the Oneida Holy Apostles Church, which is the oldest Native American Episcopal Mission in the US.  He also coordinated a history conference for the church celebrating their 175th Anniversary.

From 1989 – 1993 McLester organized 3 cultural exchanges in Europe with more than 160 Tribal members from Wisconsin’s 11 Tribes.  They were of all ages and shared their language, dances, songs and traditions with various European communities.

Gordy’s work did not stop at the reservation boundaries.  He had been active as an Oneida Singer for the past 30 years and was instrumental in nominating the Oneida Singers to be recognized by the National Endowment of the Arts which awarded them the Heritage Foundation Award in 2008 in Washington D.C.

Gordy also served on the Advisory Committee for the National Native American Veterans Memorial Project in Washington D. C.; Gordy is a veteran of the United States Marine Corp Reserve.

Friends may visit from 12:00PM – 3:00PM on Sunday May 31, 2020 at the Oneida Turtle School at N7125 Seminary Road, Oneida, WI 54155. Entering the Turtle School lot will only be allowed off Seminary Road. The family will wave to greet you as you pass them in the lot. Exiting the lot will only be allowed onto Old Seymour Road. Family requests no flowers please, donations to the Church of the Holy Apostles would be appreciated.

The family would like to extend a special and sincere thank you to all the family and friends that have been there to support us all through this difficult time.