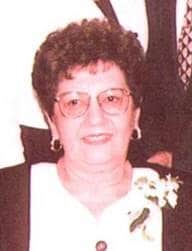 Elaine M. Hungerford, lifelong resident of Kaukauna, age 87, passed away peacefully Friday March 13, 2020 at the St. Paul Home with her family by her side. She was born in Kaukauna on April 2, 1932 to the late Herbert and Marion (Denny) Hurst. Elaine married Marlyn “Mert” Hungerford at St. Mary’s Catholic Church on September 10, 1949. He preceded her in death on October 14, 2001.

Elaine grew up with four brothers, attended St. Mary’s grade school and Kaukauna High School. She had a great love of family, faith, and friends. Elaine raised their five children in a home built by her husband “Mert” in Happy Hollow (Cleveland Ave) near the “Hurst Family” home where she was raised. Her happiest place was in “The Hollow.”

Elaine embraced her ancestry; was proud of her Native American heritage and a member of The Oneida Nation. She passed on her passion of family, friends, and heritage to her children, grandchildren and their offspring. Her greatest joy was her family. She also enjoyed making sure the cookie jar was full for her grandchildren, playing cards at the kitchen table, and trips with family to the casino.

Elaine retired at age 78 after a 27-year career (which she loved) caring for residents and building great relationships at the St. Paul Home. She is remembered as a kind, gentle soul with a playful sense of humor.

The family would like to express their gratitude and thank the wonderful staff at St. Paul Home and St. Paul Hospice, who took such loving care of our mom.