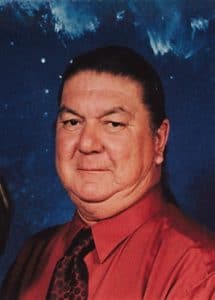 Daniel Dewain Latsisto’kwas (He Sparks the Fire) Danforth started his journey to the spirit world on September 1st, 2019 at the age of 72, with his wife and children by his side at home.

Daniel was born June 29th, 1947 to the late Margaret (Moore) and Albert Danforth in Green Bay, WI. Daniel was a well known and respected welder for Mueller Pipelines for over 30 years, as well as a member of the Local 601 Steamfitters.

Many knew Daniel as “Chief” and “Big Dan from Chicago”. Daniel was always the life of the party, known for his Johnny Cash karoke and jigging. He enjoyed fishing, hunting, cooking and was a talented artist and painter.

He is survived by his wife of 40 years, Annette, children: Dana (Al) Ihlenfeld, Danielle (Lucas Jachthuber), Joseph, Zach, Lisa (Timmy) King and Michael (Diana) Struck. He leaves behind his grandchildren: Arrow and soon to be born Stella Ihlenfeld, Leo, Mia and Levi Jachthuber, Constance and Indaanis Danforth and Rock Danforth. He is further survived by his brothers: Bruce (Mercie), Robert (Debbie), Albert (Gail), and his sisters: Mark (Frank) Jimenez, Jan (Ron) Hollar, Diana (Cisco) Hernandez, Judy (Dave) Nicholas, and sister-in-law Maria Danforth, as well as many other sister and brother-in-laws, nieces and nephews.

He was preceded in death by his parents, Margaret and Albert Danforth, brothers Redmon and Simon, and nephews Dewain and T.J.

Daniel will always be remembered for his infectious smile, hearty laugh, amazing Christmas and Easter dinners, and the infinite pride he had for his children and grandchildren.

A special thank you to Aurora Hospice, especially his nurses Jenny and Susan, and nurses aid Gerry for taking such great care of Daniel in his last months of life.