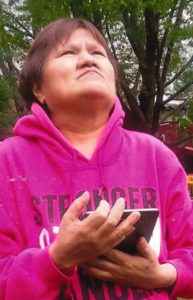 On August 18, 2019 our beloved Judy, Kahw^tsyay^teli (She the Older, She Knows the Land) entered into the Creator’s Land surrounded by her family and friends. Judy didn’t go alone as a part of us went with her as she peacefully took her final breath as while her brother in-law Dave and nephew, Lata sang for her.

Judy was the 9th child born to Arthur and Rita Webster on December 2, 1967. As the youngest girl in the family, Judy was often spoiled as she had a lot of brother and sisters that not only cared for her but she got away with a lot more things!

Judy graduated from Seymour High School in 1985 As Judy began to raise her own family, she dedicated her life to raising her three sons, Darwin (Maritza) Webster, Eric (Charlotte) Denny and Alex Denny. They were the apple of her eye and gave her the greatest enjoyment in life. She was blessed to have 5 grandchildren that meant the world to her, Natalie, Katalina, Kaelix, Hayden, Isabell and new grandchild coming in March 2020.

In her spare time, Judy loved making trips to local casino’s, enjoyed caring and feeding her birds and squirrels, and just loved being at family gatherings and making her infamous taco salad!

In 2009, Judy was diagnosed with cancer and began receiving treatments, for many years the cancer stayed in remission but until recently it returned and began traveling throughout her body. After many months of intense treatment there came a time when Judy was told treatments were no longer effective. In those final months, Judy set out two final goals, one to see her youngest son graduate and second to see her oldest son get married. Doctors said there were no guarantees, but with shear fight and determination our beloved sister, mother, grandmother and friend beat the odds and reached her goals and left this world on her terms.

Judy leaves behind her biggest fans who cheered her on, who picked her up on days when she was down, and stayed by her side till the very end. Sadly missed by her siblings Julie (Brian) Denny, Mel (Lori) Webster, Jeanne Webster, Janet (Dave) Danforth, Joanne Webster, Jacky Rice, “Kool” Karl Webster, Jeff (Carole) Webster, Bill (Shelly) Webster, sister in-law, Rosalind Webster, and step-parent, Ronald Doxtator. Also her special friends Tina Williams, Willy Love, Isaac Williams and Jasmine Williams-Cooper and all Judy’s nieces and nephews.

Judy will now be received with open arms as she enters the spirit world joining her parents, oldest brother John Webster, niece Imayshei Crumble and nephews Joseph Crumble and Joshua Webster, both her maternal grandparents Hattie and James Schuyler and paternal grandparents Arthur and Josephine Webster. We take great comfort knowing all Judy’s relatives will now be with her.

Judy’s family wishes to extend special gratitude to Crossroads Nursing staff, St. Vincent/St. Mary’s Oncology staff of such wonderful care and compassion for Judy. Also to Unity Hospice and Judy’s guardian angels at the Crossroads Nursing. Thank you Bear, Carol, Tiny, Gilbert , and Denise, for always looking out for Judy when we couldn’t be there, this means the world to Judy’s family.