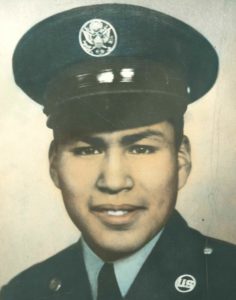 Richard Danforth, 84, Oneida, passed away Sunday, April 28, 2019. He was born July 1, 1934 to the late Dennison and Evelyn (Skenandore) Danforth. Richard was united in marriage to Eleanore Swamp.

He was a member of the Oneida Assembly of God Church.

Richard retired from the State of Wisconsin, Department of Transportation. Richard enjoyed traveling and sightseeing, feeding and watching the birds, fishing, and going to car shows, and camping. Richard also enjoyed working on cars, the Green Bay Packers, watching wrestling, reading, and going to the casino.

Richard was preceded in death by his parents, his sister Christine, his children; Lauren and Shaun, grandchildren; Shyan Wheelock, Alicia, “Baby” Danforth and his nephew and niece, Cary Danforth and Shelly Danforth.

Visitation will continue after 10:00AM Friday at Oneida Assembly of God Church, Oneida, until time of service at 11:00AM with Pastor Lonnie Johnson officiating. Full military rites to follow. Please go to www.ryanfh.com to send online condolences to the family.