To hear Oneida Nation citizen and Arizona State University (ASU) art major Tyson Powless explain it, leaving home to learn and grow was the best decision he ever made. Powless, 38, recently had one of his art designs grace the cover of a nationally published book titled ‘Paradox,’ penned by Arizona teen Piper Sehman with help from the Make-A-Wish Foundation.

“I’m currently the editor for Red Ink International Indigenous Journal,” Powless said. “My senior editor, Dr. Blastingame, who is a tenured professor at ASU, led me into doing some painting, professional art, and logo designs. He was the one who happened to be doing the proof reading for Piper’s book so that’s how that connection was made. I wanted to create the cover without using Photoshop so the whole cover was pre-drawn and pre-spray painted. I just didn’t want it to be computer animated because I’m really into comic books and I’m a self-taught artist. So, for me it was a matter of going back to basics and getting the black and white drawing done first and going from there.”

Powless is thrilled his work is now featured on the cover of a book, but his self-taught artistic resume is much more dynamic and includes far more than drawings and paintings. “I’ve been going at it from several angles since at least 2005,” Powless said. “I’ve been screen-printing and doing my own t-shirt business which is where I got my whole crazy artsy experience before going to ASU. Before ASU I was motivated to sell my work just to make rent because I always preferred to work for myself. Now I’m also a silversmith and work with jewelry, I know the different types of turquoise, I can grind stone with a lapidary machine, so things have really expanded for me to the point that I rarely even have time to make t-shirts anymore.”

Powless only recently decided to supplement his life’s experiences with the rigors of ASU. “To be honest I got recruited by ASU,” Powless said. “I wasn’t looking to go back to school because I had screwed up my junior college experience back in 2003, but to be honest I’m grateful for that experience. I had worked Pow Wows and did some fashion shows around the country. They had seen my work so they approached me and asked what I thought about returning to school. But getting into the Arts Department there really took some work on my part. But they respected my work and saw what I could do so we agreed to play and do some damage in a very positive way.”

Powless credits his late father with inspiring him to finish his college degree. Not only that, his father’s legacy would go on to help thousands of Oneida citizens achieve their academic dreams. “I respect my father so much,” Powless said. “Dr. John Powless II is the one who pushed the Higher Education Scholarship through back in ’94. I remember that day and it chokes me up to know that my dad’s gone but he did that for all Oneida people. Yes, I sat on that (scholarship) for years but before he passed I know he saw my accomplishments and me going back to school. He knew.”

At the moment Powless’ future after college is a bit uncertain but he has some lofty ideas that are well worth pursuing. “There’s some talk about me going straight into my Master’s Program after graduation,” Powless said. “Not knowing what the possibilities are right now I also think it would be really nice to work in a different country. I’d like to see what I can do with a different university down in Mexico City. My ultimate goal is to help create jobs for people through my art whether it be through jewelry, fashion, or music.”

Following his life of leaving home and learning to create and sell his diverse artistic creations to survive, Powless says today’s young people need to try and gain certain experiences at an earlier age. “You can teach our culture and with the kids it’s going to sink in,” Powless said. “But I think you have to add the hustle into the culture. And what I mean by hustle is having kids making their product and knowing how to sell it efficiently and not just doing that stuff in high school. For example, if kids can pick up the grassroots of our culture and jewelry in elementary school imagine where they’d be by high school. They’ll be able to take it further than just creating it.

“Another thing people need to know is you can’t expect to create Native art within your reservation and think ‘I dominate,’” Powless said. “You have to go to Chicago, New York, Phoenix, somewhere so you can make your presence heard and get to learn a different environment. That’s the only way to do it. I’m privileged to have Phoenix in my backyard and I use it to my full capability. If I had stayed in Oneida would I be able to talk about the things I’ve done? No. There are Oneida members all over who are proud of where they come from, and even though they don’t stay in Oneida doesn’t mean we hate on our town.”

Powless is the son of Wisdoma Lifewarrior and the late Dr. John Powless II. He resides in Phoenix, Ariz. 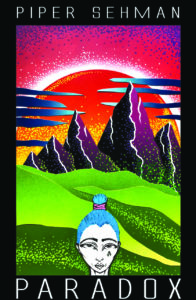