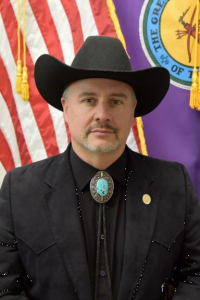 WASHINGTON – Secretary of the Interior Ryan Zinke appointed Dr. Gavin Clarkson, a citizen of The Choctaw Nation of Oklahoma, as the new Deputy Assistant Secretary for Policy and Economic Development – Indian Affairs within the Office of the Assistant Secretary – Indian Affairs, a supervisory position for the Offices of Indian Energy and Economic Development, Indian Gaming, and Self-Governance. Dr. Clarkson assumed the position on June 11, 2017.

“Dr. Gavin Clarkson’s expertise in the areas of law, finance and economic development are a valuable asset to the Department of the Interior and the Office of the Assistant Secretary for Indian Affairs as we work together with tribes to increase economic opportunity and promote self-determination throughout Indian Country,” Secretary Zinke said.

In announcing the appointment, Secretary Zinke also noted that the Financial Times had named Dr. Clarkson the nation’s “leading scholar in tribal finance,” and pointed out that he has been repeatedly cited by the Wall Street Journal, Bloomberg and USA Today on tribal finance and other Indian law matters.

Dr. Clarkson said upon the appointment, “I want to express my deep appreciation to Secretary Zinke for this tremendous opportunity to bring new ideas and methods to Indian Affairs for tribal business and energy development. I am excited to help tribal nations and tribal entrepreneurs create the conditions under which they can build, expand and sustain their economies.”

Dr. Clarkson holds both a bachelor’s degree and an MBA from Rice University. He earned a doctorate in Technology and Operations Management from the Harvard Business School, and is a cum laude graduate of the Harvard Law School. He also holds Series 7, Series 24 and Series 66 Securities licenses from the Financial Industry Regulatory Authority. He was previously awarded a grant from the National Science Foundation to study the dynamics of tribal finance, and his research and congressional testimony on tribal access to capital markets helped lead to the inclusion of $2 billion of Tribal Economic Development Bonds in the American Recovery and Reinvestment Act of 2009. He has also consulted and served as an advisor to tribal organizations and federal agencies on tribal finance and economic development issues.

Dr. Clarkson is a great supporter of Native students in higher education. He is a lifetime member of the American Indian Science and Engineering Society (AISES) and served as chairman of the AISES Foundation from 2005 to 2009. He has also been a member of the Indian Law Section of the Federal Bar Association, the Licensing Executives Society, the Native American Finance Officers Association, and the State Bar of Texas.