With a roster of young players gaining valuable experience, expectations for the Oneida Nation Thunderhawks lacrosse team are through the roof.

When Summers says high, he means a state championship.

“The boys have been putting in work. The boys set their own standards and they’re higher then ever,” said Summers. “The team has potential to go far. In previous years, that was true but with the experience they are getting they are starting to see and understand their true potential.”

Many of the Thunderhawks have gotten their basic skills from playing with the youth Oneida Community Lacrosse Program. Now, those players are older and are sharpening those skills with elite travel teams.

The team’s roster is at 18 players and much of the group’s leadership is coming from younger players.

“I know the potential is there, but the kids need to believe in themselves. I’m leaning on our leaders to show the way,” said Summers. “Those guys are sophomores Emerson John, Fox Christjohn, and Jack Mehojah.”

Summers has identified John as the guy that teammates are looking to for leadership.

“He’s grown into that spot, everyone looks up to him. When he has something to say, the kids listen. He tends to make everyone play better,” said Summers.

With a season of lofty goals ahead of them, Summers is trying to build momentum by stacking smaller successes.

“For the past two months we’re working on accomplishing smaller goals which will make obtaining our larger goal more realistic,” said Summers. Those smaller goals include all players buying in to the team and creating trust between teammates.

In their opening game the Thunderhawks fell to Bayport 11 – 8. Their first home game is Tuesday, April 25. Home games will be played at Flying Leaf Park in Site II. 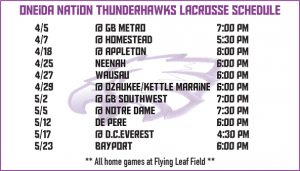