By the 1930s the government changed and through a new Oneida Constitution, an elected system was put in place. During this era, women were elected to the new council, usually as Secretary and later years as Treasurer. Women were focused on improving the quality of the community by looking for resources to build homes, improve education and find jobs for young men and women.

During the early years of government under the new Constitution, men held the Chair position throughout the 1930s until the 1960s. In 1963, for the first time, the Oneida community elected a woman to lead the nation. Irene Metoxen-Moore was the first woman to serve as Chairwoman of the Oneida Business Committee (OBC). Moore served previously as Vice Chairwoman of the Committee from 1952 until 1962, except for the year of 1955 in which Norbert Skenandore held the Vice Chair position. During her tenure as Chairwoman, Moore advanced better opportunities for housing, education and elder care services on the Oneida Reservation. Moore served the Oneida community on the Committee in some capacity until 1976. The current gaming facility which houses the bingo hall, off track betting and slot machines is named the Irene Moore Activity Center or IMAC in her honor.

By the early 1970s the result of an expanded Business Committee to nine members saw more engagement by Oneida women. More often than not women held multiple positions on the larger OBC, and in the 1980s and 1990s women held five or more positions on numerous occasions. Then in 1993, the General Tribal Council elected the second woman to serve as Chairwoman. Debbie Thundercloud, nee Skenandore-Doxtator was elected. In fact, the 1993 election yielded 6 of the 9 positions held by women, including Chairwoman Doxtator, Vice Chairwoman Loretta Metoxen, Secretary Julie Barton, and Treasurer Kathy Hughes.

The previous two decades have frequently seen Oneida women at the top of the leadership chain.  For at least 4 administrations, women have held all four top leadership positions. 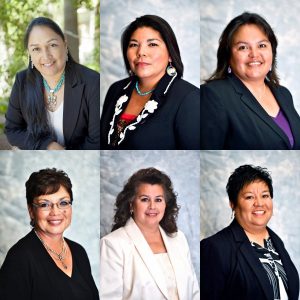 Cristina Danforth, current Oneida Chairwoman is probably the most experienced in terms of how she has served on the Business Committee. Danforth has served the nation as Councilwoman, Treasurer, Vice Chairwoman and Chairwoman for the second time.

Vice Chairwoman Melinda Danforth is serving her second term on the council, but has worked as a legislative assistant to previous Chairwoman Debbie Thundercloud and Chairman Gerald Danforth.

Secretary Lisa Summers is serving her first term as an elected official, however she has served as legislative assistant to the Vice Chairwoman Melinda Danforth and previous administration.

Treasurer Trish King is currently serving her first term as Treasurer, however, she previously served as a Councilwoman and as a legislative assistant to retired leaders, Chairman Gerald Danforth and Councilman Paul Ninham.

Councilwoman Jennifer Webster and Councilwoman Fawn Billie are the newest legislators on the Oneida Business Committee, each serving their first term on the council.

The Oneida Business Committee is fortunate to have six women in key leadership positions at the same time. Women have come a long way in Oneida, and they have become some of the most prominent leaders on the Reservation.