Laurence M. Hauptman’s new book An Oneida Indian in Foreign Waters: The Life of Chief Chapman Scanandoah, 1870–1953 tells the tale of a man who used his talents to excel in a changing world.

“I call it ‘In foreign Waters’ because not only did he venture into corporate America … he was also in the white man’s courts fighting for Oneida lands,” said Hauptman who is State University of New York Distinguished Professor Emeritus of History.

Hauptman is well known for his books on Iroquois land claims and history, and was drawn to the story of Scanandoah who fought for the 32 acres of land in the Oneida homelands, and worked to end pollution on Lake Onondaga.

“What’s so amazing about the Chief Scanandoah that he was an inventor, and that’s what drew me to him. He actually worked for Thomas Edison,” said Hauptman. “I never saw anything in the literature about Native Americans as scientists and inventors, so I said gee, this sounds like a good idea.” 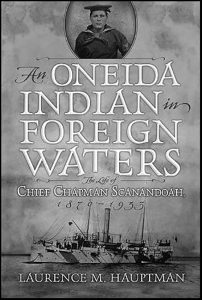 Scanandoah started working on inventions during his 15 year career in the US Navy.

Hauptman stated Scanandoah “liked to say he was the first Native American to circumnavigate the world.” During his travels, he would meet with and journal about other indigenous people.

“In the Navy he describes native people all around the world. He describes what he sees,” said Hauptman.

Scanandoah served from the Spanish American war until just before World War I. He then went to work for Edison Illuminating Schenectady Edison Electric Illuminating Company of New York.

Hauptman took the advice of an Anishinaabe friend who told him there should be more biographies about Native Americans.

“We had heroes, too. They weren’t all warriors, either,” Hauptman quoted his friend.

“That’s why I wrote the book, it sort of challenges all these images of Native Americans. The only time they think of Native Americans is as if they were warriors,” said Hauptman. “I want to do something about people being remembered, positive stories … what about those people who were really brilliant? Who never really gave up.”

To order An Oneida Indian in Foreign Waters: The Life of Chief Chapman Scanandoah, 1870–1953 visit http://syracuseuniversitypress.syr.edu/fall-2016/oneida-indian-foreign-waters.html