Spirit of Hoops works to raise spirits of youth 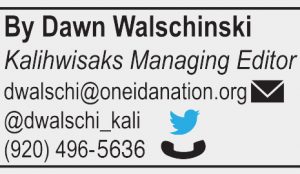 Many Native American children face obstacles in their lives. Dave Powless wants to show them how to use sports to get through them.

“The power of sports is … helping you realize that a lot of the things that you need in your life, you already have, just tap into them,” said Powless.

Powless is president of Spirit of Hoops, a program that brings basketball training to Native American reservations.

“I’ve always believed that the importance of athletics in in high school and in grade school. It changed my life to a point where I learned … you can do more than what you ever believed you could do,” he said.

Powless came from a family of athletes, but felt he lagged behind in his youth.

“My father was the captain of the basketball team at Haskell 1926, played football there, and a brother playing at the University of Indiana on scholarship, a brother at Northwestern University on scholarship. I was a junior in high school and I was nothing as an athlete. One day I said I’m going to try to do (football) until I feel good inside of myself knowing that cannot be good or better than anyone else, and by the end of my senior year I was all state, 10 offers to college, ended going to University of Illinois, Rose Bowl, and then drafted to the NFL.

Powless’ two year career as a guard with the New York Giants was cut short due to injuries, but he had learned what he was capable of by pushing himself physically. He hopes to share those lessons with Native youth to tackle problems like alcohol and drug use, gangs and suicide.

“There’s some really strong documentation that the use of sports and exercise … has a way of improving one’s brain and mental attitude, and combating depression, and of course instilling some health and preventing diseases like diabetes,” said Powless.

While working with the youth, Spirit of Hoops also works with local coaches to teach techniques.

“These guys and girls, women, lived on the reservations and have faced a lot of the problems that young kids face today, and they’ve come back, some with their degrees, some not with their degrees, but they’ve come back to their reservations and they’ve had the interest to help their own people, to help their own children,” said Powless. “I really admire that because they put up their own money, they put up, their own time, they become the surrogate mother or father to the boys and girls.”

Powless hopes the youth who participate have fun, and learn that athletics is about more than being better than the competition.

“The real higher points of athletics which relate to perseverance, working hard, discovering what it takes to get physically active, and some of the pain that you pay for that, and some of the good feelings that you have from that,” he said.

The Spirit of Hoops Basketball Camp will take place July 7-8 at the Oneida Nation Elementary School. The camp is open to Oneida community youth ages 6-17. Contact Lori Hill at 920-490-3803 for more information or visit www.facebook.com/spiritofhoops